Going to start out 2021 right by doing what I didn't do right in 2020 (and prior years if I am being completely honest with myself) by writing a blog post I said I would. Over on YouTube, I had written a comment stating I was inspired to compose my own blog post detailing my top ten graphic novels of works published during 2020. As 2020 ended, I chickened out. Then, the Uncanny Omar of Near Mint Condition replied back he would like the link. Shucks, might as well compose my list then!

For context, here's the video the Uncanny Omar of Near Mint Condition released:

An important caveat: these are graphic novels released during 2020. Not released AND read. These are ten graphic novels that owning them hold a special place in my heart. So, in no particular order, let's get started: 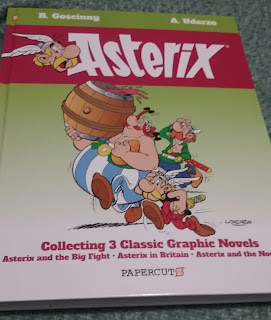 Asterix Omnibus Vol 3 Hardcover
More of an omnibus in the sense it collects three albums (volumes) of Asterix. I would call it a graphic novel myself. I've always wanted to read the European produced Asterix as he's such a long running character. Timing and budget was my obstacle. Recently, Papercutz acquired the license to produce English-language translations intended for an American audience. Think the Funimation adaptation of Dragonball Z. Cultural incompatibilities have been edited; however I am not a purist so it didn't bother me. The reason I selected volume three is because it represents my continual purchase of the series. Sometimes I will buy the beginning to a series and then stop earlier on. I am also switching more toward the Marvel/DC omnibus format. As such, this will be among the few graphic novels not in such an Omnibus format I will be purchasing in 2021. 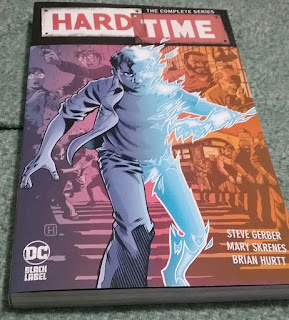 What made Hard Time Complete Series a must buy is two factors. One, I was on a Howard the Duck (another of Steve Gerber's creations) yahoo group around the time this title came out. Hard Time was among his final creations; and Gerber would comment on both Hard Time and his other projects before he passsed. Second, I never expected a trade paperback a decade - decade and a half after the second volume finished. Hard Time was a niche comic and was cancelled twice. A victim of a tight comics market. Now, I can read the entire story without tracking down all the issues. 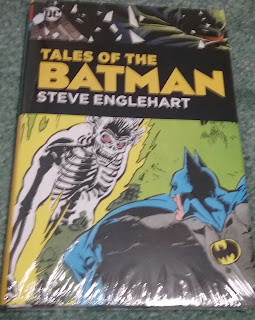 Tales of the Batman: Steve Englehart HC
If there's a book epitomizing DC's attitude toward the direct market (comic shops), it's this Tales of the Batman Steve Englehart HC. DC released it during the lockdown. When Diamond was closed. While many comics shops were closed. During the six months after lockdowns began, fear of missing out ran rampant. Online vendors sold out. I had two options, order from Amazon or try my local comics shop. My local comics shop was able to order a copy.
There's another reason Tales of the Batman Steve Englehart HC is on my list. Years ago, I discovered one of THE top artists for Batman, Marshall Rogers. Marshall Rogers's Batman work is short but sweet. The hardcover Legends of the Dark Knight Marshall Rogers collect all of his Caped Crusader output. By the time my budget allowed, it was both out of stock and out of print. I was able to pick up a book collecting his work with Archie Goodwin; but his short, acclaimed work with Steve Englehart eluded me. Until now. 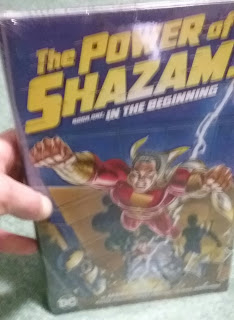 Power of Shazam: Book One: In the Beginning HC
In hindsight, the fact I pre-ordered this after DC's split from Diamond and picked it up from my local comics shop without incident is noteworthy in itself.
I touched upon why Power of Shazam was a must buy during my 2020 Comics Hauls. Jerry Ordway's Shazam run was case of learning about a series too late during its run before 'everything is collected in graphic novel format' was a thing. Pretty much waited twenty plus years. 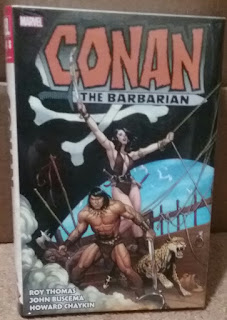 CONAN The Original Marvel Year Vol 3 Omnibus
My first omnibus during 2020. It's also the omnibus on this list I purchased as part of IST's Deal of the Week. Alas, DC's departure has pretty much put an end toward IST offering newly released omnibuses from Marvel and DC at half off.
Beyond that. It's Conan. The omnibus includes the feature that led me to love the Marvel Omnibus format, i.e. letter page reproduction. Not only are letter pages reproduced; but it's the closest reproduction of the early Marvel Conan's. Heck, it has colored REH stories in tbe Mighty Marvel Manner too! 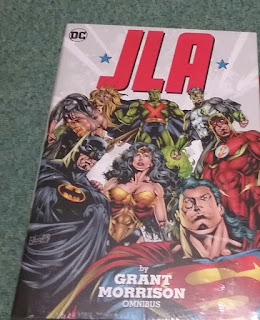 JLA by Grant Morrison Omnibus
My last published during 2020 omnibus that arrived into my possesion. It was among the Black Friday/loyalty discount purchases from IST. Otherwise, the price is too much for my budget.
'Grant Morrison's JLA is over-hyped!'
A weird statement considering the JLA was DC's flagship title during the late 90's. Looking back, I didn't read his JLA run until mid-way and much of that was by fill-in writers. If you call Mark Millar, Mark Waid, and J.M. DeMatteis fill-in writers, but much of his run that I read wasn't written by him. It's like judging Sir Arthur Conan Doyle's Sherlock stories by pastiche writers.
Furthermore, I never read much of Morrison's earlier work on JLA. Nor did I read Classfied, Earth 2, or some of DC 1 Million tie-ins. Thus, I never read the full Grant Morrison JLA. Would I have liked some of the stories included as well? Yes, but then not all of Grant Morrison's complete JLA work would have been collected withkn a single volume. A Compleat Morrison, if you would. 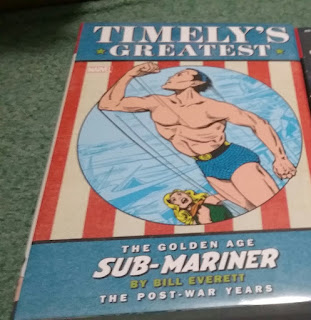 Timely's Greatest - The Golden Age: Sub-Mariner by Bill Everett The Post-War Years Omnibus
I hadn't grasped the impact lockdowns had on the omnibus market until I watched the Direct Market cover (depicted within the photo) of Timely's Greatest GA Submariner by BE Post War Years sell out within a day. Shock. Absolute shock gripped me. I'm a huge fan of Golden Age Marvel especially for Golden Age Marvel never before restored. I owned the three previous volumes in the Timely series. All three sported the flag color-themed cover. The need for the covers to match was strong. Plus, it was heading into Fourth of July weekend. All was not lost though. Cheap Graphic Novels had a copy. So on the evening of Fourth of July (give or take a day), I placed my very first order from Cheap Graphic Novels. 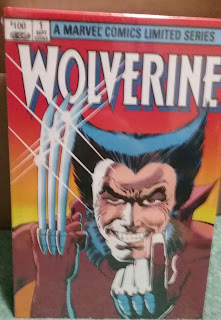 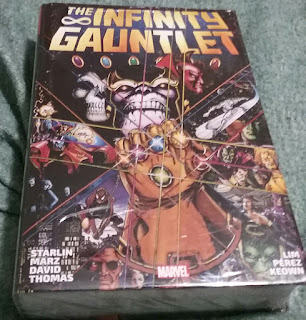 Infinity Gauntlet Omnibus
The day IST made Infinity Gauntlet Omnibus available, I decided to wait a little before placing my purchase. An hour later it was sold out. Cheap Graphic Novels was sold out. Heard it was sold out everywhere. I noticed Half Price Books online would have copies available a couple weeks later. As if I was standing in line Black Friday shopping I waited until after midnight the very day it became available at HPB and ordered a copy. Thus, I ordered my first omnibus from HPB.
Huge Jim Starlin fan; and Infinity Gauntlet was a story I passed on years ago because as a kid I couldn't afford it, let alone all the tie-ins too. Once I acquire Infinity Crusade Omnibus, I will own all the Cosmic Starlin Omni's released so far. 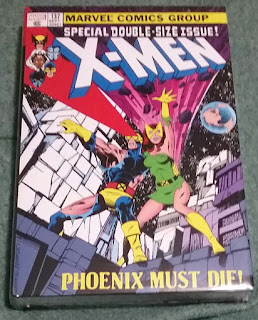 Uncanny X-Men Omnibus Volume 2
Uncanny X-Men Omnibus Volume 1 is one of the reasons I buy omni's. Chris Claremont is among my favorite comic book writers. I love, love, love omni's that include letter pages. Volume 2 was among my wants list after perusing volume 1 years ago. Needless to say, I had to have Uncanny X-Men Volume 2.
Well, I hover on IST waiting for it to become available. One cover does. Fine. I add it to my cart. Then while checking and becoming confused as why another omnibus I wanted wasn't available, the standard cover for Uncanny X-Men Omnibus Volume 2 was taken OUT OF MY CART. Neither cover was available. Twenty minutes later, I log in again and discover the Direct Market cover was available. I add it to my cart. The screen loads the purchase screen at agonizing pace. I complete transaction. Then, a couple hours later (it's normally a matter of minutes) and as I read horror stories of emails from IST about orders actually being out, I receive the confirmation email. A week later I relax once the order is picked and scanned.
No other omnibus purchase has matched that experience. Uh, I hope it never is.
There you have it, my Top 10 Graphic Novel published and in my hands during 2020.
Happy Collecting!
Next time.