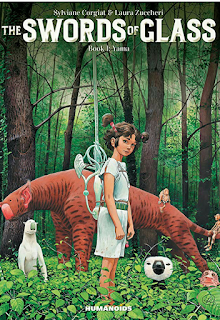 Took about a month; but I finished another graphic novel (after last month's The Black Incal) utilizing the benefits of Prime Reading on the Kindle app. Graphic novel in question is another work from Europe published by Humanoids The Swords of Glass Book 1: Yama by Sylviane Corgiat and Laura Zuccheri.

The designs of Laura Zuccheri are what distinguishes The Swords of Glass Book 1 Yama from typical fantasy setting patterned after the Medieval Period of Western Europe. The peoples, arms, armor, and locales evoke multiple human cultures albeit with their own exotic touch. Creatures are Earth animals rendered fantastic. Many of the creatures are amalgamations. Art is incredibly detailed and sequential story-telling top-notch.

The Swords of Glass Book 1 Yama introduces the main protagonist, antagonists, and setting in what looks to be a coming of age revenge epic fantasy story. Yama seeks vengeance against Orland for the death of her father along with taking her mother away from her. All amongst a world whose sun is about to go nova. However, there is a sword that transforms all who touch it to glass except her. She is taken in by a disillusioned swordsman who instructs her in the way of the sword. He tells Yama the sword is one among others that hold a key to world where their doomed world's inhabitants may escape. Book One ends with all the main protagonists and antagonists all within the same vicinity.

I'd go into more detail; but I don't want to spoil more than the basic plot points. While Orland and Yama are name-dropped regularly as is Yama's mother Rainbow, I can't really remember her mentor's name. His two miniature sidekicks aren't even named.

Pretty much all the setting world-building is done through the art. For instance, there's giant humanoids used mounts during flashbacks but they are never referenced nor are they seen when raiders ride toward Yama's village. None of the creatures really seem to have names either.

A solid beginning to a revenge epic fantasy story or at least the set up for one. There's some world-building primarily through the visuals. I like these type of stories so I will definitely read the next installment. However, there's nothing earth-shattering with the first installment of The Swords of Glass so I give it 3 out of 5 stars. Recommended.